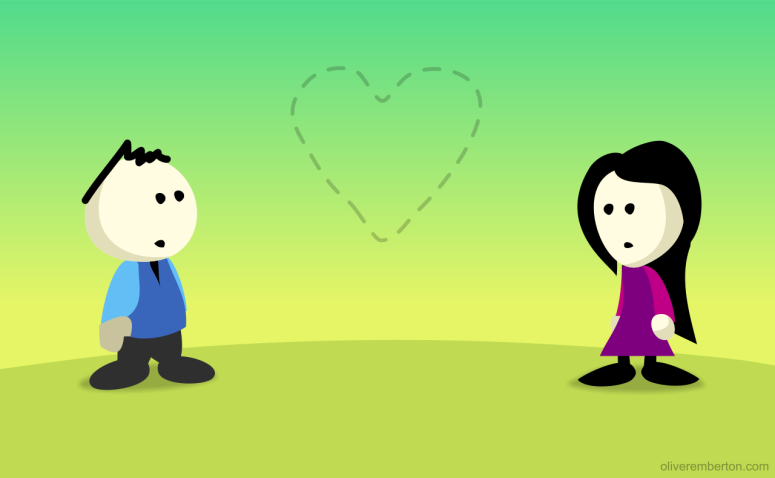 We were perfect strangers. And yet today, our parents were together, discussing and finalizing the details of our engagement and marriage, over coffee and biscuits.

We had met each other four months back. My mom had liked his profile on a marriage portal and had bugged me forever to look him up. I wasn’t at all interested. In fact I couldn’t really understand why she was in such a hurry to marry me off. It was depressing to say the least. It wasn’t as if I was a trouble-maker. Far from it. I had always been a filial daughter, and always tried my best to not break the rules. Of course, this didn’t mean that I was perfect. But at least in the eyes of the society, I had no flaws to speak of. I believe that is what every parent worries about the most- their daughter’s and their family’s reputation.

After all it wasn’t as if I was on the shelf. I had just turned 26. Having finally finished my studies, I was busy looking for a job. And add to that the worry that I was a bit too old to be a fresher, well it wasn’t so surprising then, was it, that looking for a guy was the last thing on my mind?

Yet just to humour mom, I contacted Jerome. He was photogenic, and his educational qualifications were good. He had a stable job and the family was an old, reputed one. Mom had already talked to his family and she found them to be really wonderful people. I would chat with him for about 15-20 minutes twice or thrice a week. But I was still very much worried because our chats were totally mundane to say the least. He would ask about what I had for my breakfast, what I planned on making for dinner. Not to be left behind, I too would ask him about his day. This went on for a month before mom felt it was time we met.

The meeting was as informal as it could be. I, along with mom and dad, went to his church on a Sunday. He naturally was there with his parents. The families met and talked, standing outside the church. But Jerome and I hardly ventured beyond a hello. I was feeling too shy and too much like a fish out of water. I had already started to cook up excuses to escape, torn between retching and actually puking all over his shoes. Maybe his mom noticed my panicked expression. Maybe that is why she insisted that we continue our conversation over lunch. So we all moved in to a nearby restaurant and had a hearty meal together. The entire thing would have lasted for an hour or two. But still, I only managed to say some really mundane ice breakers. I frankly didn’t even know what to talk about. And worse still, I was so tensed that I didn’t even know what we ate.

All the way back home, all mom and dad could talk about were Jerome and his family. They were clearly blown over. Strangely enough, his family had also liked me. I sincerely don’t remember saying or doing anything that could have possibly left a good impression on them. Maybe it was the way I held my spoon and fork?

And before I knew it, the marriage was fixed. The preparations had begun with gusto. I still didn’t know what to talk whenever he called. I’m sure Jerome must have felt my trepidation, my hesitation. His calls reduced thereafter. Infact, I wasn’t even sure if I wanted to get married, if he was the right guy. All the novels talk about love at first sight and butterflies in the tummy. But I didn’t feel any of the symptoms of love or even lust. I went through the days in a daze. Everything was happening too fast. I was too scared. So much so, that I prayed daily, asking the Lord Almighty to intervene if I was making a mistake, if he was a mistake.

And then one day, it seemed the Lord had finally answered my fervent prayers.

Both the families were gathered together in the living room and were discussing the finer points of marriage and other ceremonies over coffee and biscuits. Soon enough, the matter of money was raised. His family outright refused to accept or ask for any kind of dowry. But then he stood up.

“Maybe you don’t, mom and dad. But I do. I expect something from Rose’s family when I get married to her.”

Everybody was stunned. He had been so well-mannered, so soft-spoken till then. He had agreed with a smile to each and every suggestion put forth by both the families. Yet now he had a difference in opinion, that too on such a major issue! I held on to my kitten, waiting for him to incriminate himself further, waiting for this marriage to break off. The feeling of being smothered, of being underwater had intensified over the weeks. I was ready to bolt. To run away. But maybe now I wouldn’t have to hurt my parents that way. Maybe he would break off this wedding for me. I prayed that he would ask for an impossible amount. Enough to make my dad say a big flat NO right away.

He was being given angry glances by his parents, who looked genuinely disappointed in him.

“I thought I had brought you up to be better than this. Clearly I have failed as a father. Dear, where did we go wrong?”

Uncle sounded genuinely defeated, broken almost. Aunty looked desolate too. His sister, Neena, looked so very angry, I thought she might reach out and strike him.

“Let us listen to his demands. If it is something within my means, I would surely do whatever I can to make my daughter’s life smoother after her marriage”

Even though my dad said that, I knew he was already revising his opinion about Jerome, already wondering what other things he had overlooked. He had already started to blame himself for choosing such a man for me.

I was torn. While I was most certainly feeling rushed and smothered because of this marriage, I had also come to like him. I was starting to think of him as a part of my life. Slowly, bit by bit, I was getting used to the idea of spending the rest of my life with him. But then this happened. I really didn’t know what to feel or think. I suddenly felt so cold that I hugged my kitten tightly.

She started to squirm as my hold tightened. Alarmed, I loosened my grasp when she started to struggle and claw me. She took the chance to jump off and move towards him, something she had never done till then. Suddenly I felt like crying. My kitty had finally acknowledged him but it was too late- the marriage was going to be called off.

The tension in the room was stifling. No one spoke or moved. Each pair of eyes followed my kitten as she moved towards him. She purred and rubbed up against his leg. He bent down and rubbed her ears. And then he picked her up in his arms, and kept stroking her thick fur in a soft, soothing motion. My throat felt heavy, burning as if it were on fire. It hurt due to the unshed tears I had to hold back.

“What are your demands?”, dad asked him again.

“I want her”, he said, looking at my kitten.

Three words and I fell in love with Jerome. Three words and all my hesitations, my fears, my misgivings, my feelings of being smothered- everything disappeared. He literally glowed when I looked at him. I had never seen a man look more handsome, more glorious, more spectacular as Jerome looked at that moment, with my kitten in his arms.

“I want her kitten as my dowry”, he repeated again.

The silence in the room changed subtly. It was no longer a silence shimmering with anger and disappointment. It was a stunned silence. If my parents and his parents weren’t in the room, I would have ran to him and hugged him. As I was soon going to be a blubbering mess, I tried to leave the room as inconspicuously as possible. But I ended up taking in a noisy, watery breath, making him look at me. That was the last straw. My tears burst through my eyes and flooded my cheeks. All eyes turned to me.

And like all those heroes in my zillion romance novels, he slowly walked- no he glided  towards me, with my kitten in his arms. My teary eyes followed his every move. He stopped right in front of me, and getting on one knee and holding out my kitten towards me, he asked,

“Will you marry me?”

Thanks to the hearty lunch I had had, I didn’t swoon. I couldn’t take my eyes off his face. His eyes, his nose, his lips, his eyebrows- everything looked so very dear to me then. He looked so very handsome. He was spectacular and shining and even looking at him made my eyes hurt. And I knew no matter what happened, this moment would forever be branded in my memory. No matter how bad things got henceforth, I would always have this to fall back on.

The room erupted in cheers and laughter and teary “What the hell”s. My watery “yes”, as a consequence, was lost somewhere in all that noise. But just in case he could not see the stars and hearts pouring out of my eyes, I grabbed him tightly in a bear hug, our parents be damned. It was only when my kitten squirmed that I realised he still had her in his arms.

2 thoughts on “Love in the Time of Shaadi.com”